In 2009 Joe Viglione wrote A Study of Lou Reed’s Berlin and Rock & Roll Animal Albums; in it he said:

Steve Hunter and Dick Wagner were as potent a duo as Keith Richards and Mick Taylor, and the four make-up the “Golden Era” of both The Rolling Stones and Lou Reed, that period when the recordings were beyond magical…. Lou’s 9/1/73 show still rates as numero uno in my book, for presentation, drama, craftsmanship and sheer rock and roll energy

It’d sure be cool to have been there, or at least be able to hear that one.  Time passes… and then the other day I ran across an amazing site the other day –  some french guy has tried to capture all (and I mean all) bootlegs of lou reed in existence.  He cheats a little and includes the 1962 recordings, but I’m not complaining, and it was fun hearing lou from the beginning. 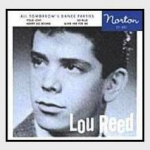 So I look… and there it is, September 1st, 1973, at the Tenglewood Festival.   To quote lou, you know those were different times. The hunter and wagner dynamic guitar duo was pretty special (later on fronting and coauthoring much of alice cooper’s best work and a whole lot more.)

The recordings are mostly hosted on a kind of french megaupload site and packed in those stupid rar files, but … how can you complain, really?

What a loss, all those concerts and music thrown away over the years… wouldn’t it be amazing to just go back in time and basically listen to any concert ever?  With out litigious world it’s amazing that this site can even exist.

Viva the R&R animal (what a great first side of the long gone LP.)