I was talking to mike lloyd tonight, a truly wonderful human being and one of the most viciously smart folks I know (he’s currently the CTO of Red Seal Networks); the kind who, if in the days of the musketeers, would put a blade through your chest and apologize profusely for inadvertently wounding you.

We talked of the bear… you know, the old canard about the 2 campers and the grizzly I’ve heard wheeled out quite a bit about security… the “as long as I can run faster than you, no problemo” kind of mindset.  But…what if the world isn’t like that one grizzly.  What if it’s not one bear, but a bear behind every tree, an army of zombie winnie the poohs lumbering slowly at you… would that change things?  From sprint to dodge ball, perhaps?

I’ve strong feelings about all this and will probably talk more of this at some date, but he told me of a board meeting he was in, and how they were wresting with the utility of security (if there was any!)  Apparently one board member asked – “why do they put brakes on race cars?”  The answer is, paradoxically, so they can go faster.  Imagine driving a F1 racing monster without brakes – you’d have to crawl.

Forget enablement or other weasley words that security folks try to justify their existence with.  It’s about speed, it’s about acceleration, it’s about moving faster than internet time and dealing with sudden surprises as you’re zooming along in that turn with the ice and snow and a deer, a moose, or a external auditor suddenly appears… you can slam into them and probably kill them… but at a grievous cost.  Security lets you avoid the moose.

Some seriously disturbing images when searching for pooh, these are some tame ones  ;) 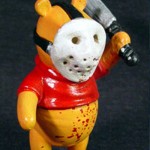